Luang Prabang – The City of Wats

Luang Prabang is located in the north of Laos, about 180 kilometers from Vang Vieng and 340 kilometers from the capital of Laos – Vientiane. Luang Prabang features one of the two international airports or Laos (the other one being located in Vientiane), so it can easily be reached from all over Asia. It can also be reached by bus from different directions – Thailand, Cambodia and also from within Laos.

We arrived in Luang Prabang from Vang Vieng by minibus. We pre-booked a bus in Vang Vieng with Malany. The minibus was very comfortable (the bus, not the ride itself though) – the transfer takes about 6 hours (although they sell you the ticket telling you it takes only 4 hours).
Cost for the bus per person: 100,000 KIP 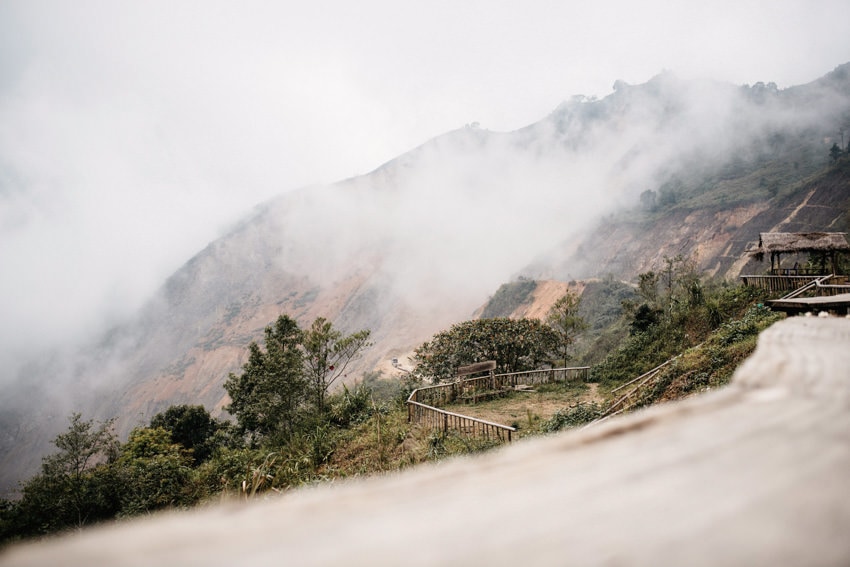 As Vang Vieng does not have an airport, a bus is basically the only option to hop between the two cities. The bus stopped about 2 kilometers from the city center where we took a tuktuk to arrive in the city. Prices are arbitrary and negotiating a must!

Luang Prabang – The City of Wats

Luang Prabang has been recognized as a UNESCO World Heritage for its cultural and architectural significance. The city features over 30 Buddhistic temples (Wats) and is one of the hotspots for tourists from all over the world. Furthermore, the city is famous for the waterfalls that can be found in the nearby surroundings and the Pak-Ou Cave, the night market at the bottom of Mount Phou Si and the recently opened (2016) Botanical Garden Pha Tad Ke. Every year hundreds of thousands of tourists come to Luang Prabang to experience its unique atmosphere – unfortunately, the inflow of so many tourists do not really have positive effects on the city’s flair. 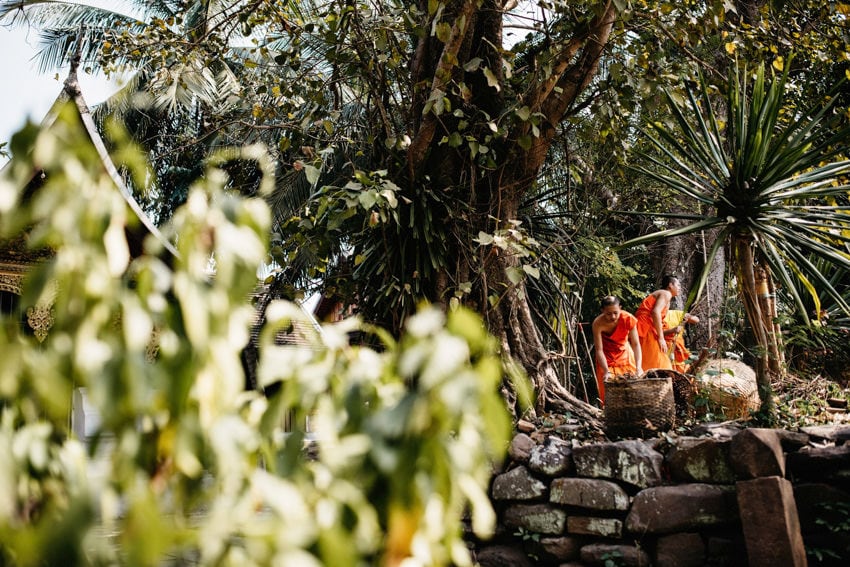 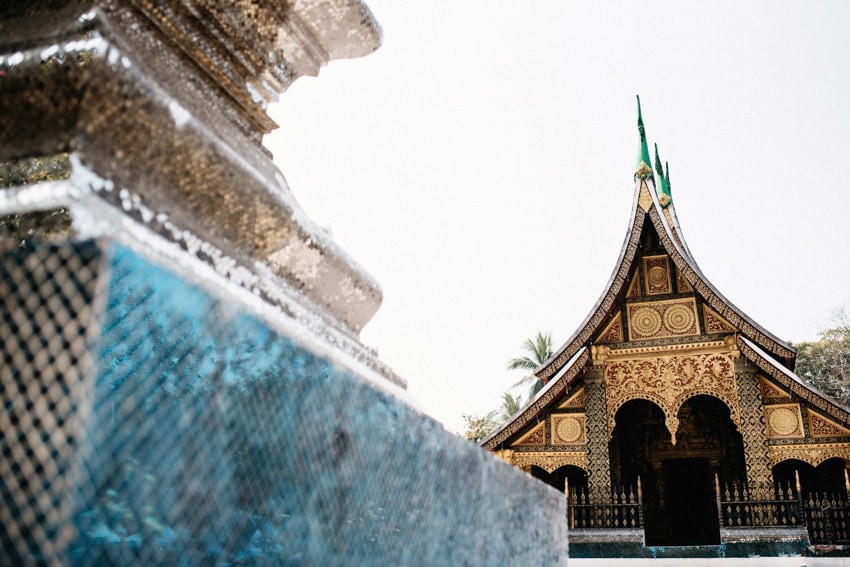 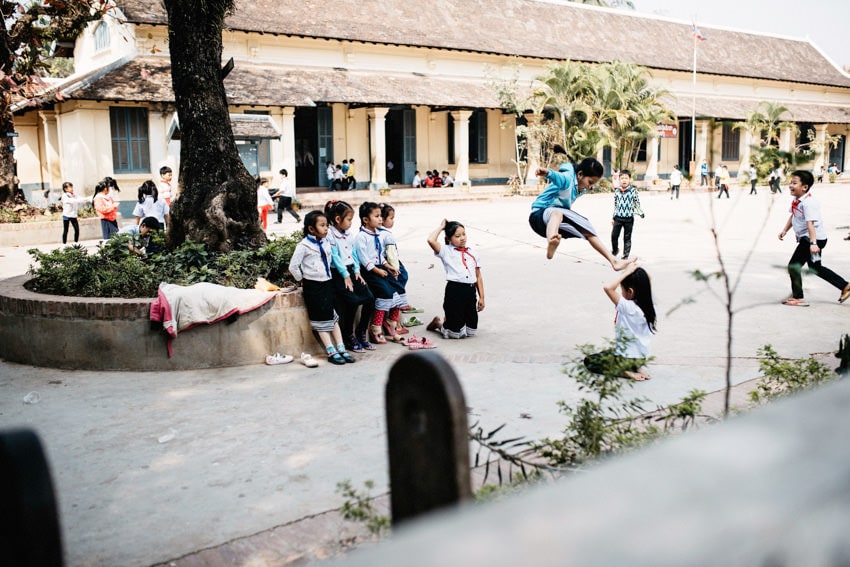 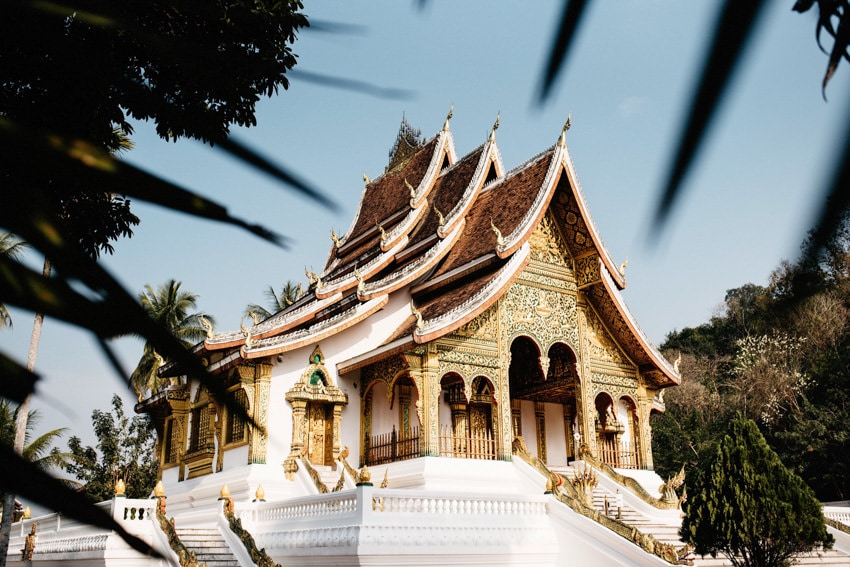 While the huge inflow of tourists is a blessing for the city’s economy and wealth, it is pretty much of a curse for its formerly unique atmosphere and the “hidden gems”. So, if you are looking for an abandoned place full of untouched and authentic Laotian culture and architecture, Luang Prabang might not be the spot for you to unconditionally fall in love.

The Other Side of the River

On our first day in Luang Prabang, our plan was to explore the city. As there are more than 30 temples spread all over the city and its surroundings, we spent one day visiting several temples. In the morning, we crossed the famous bamboo bridge, which led us to the other side of the Nam Khan River (a tail of the Mekong River). The bamboo bridge is a spectacular construction – it is only built up during dry season – in the rainy season they remove it as it is too dangerous to cross it. As we visited during dry season, we had the chance to cross it. As with everything in Laos, in order to cross the bridge, you have to pay 10,000 KIP per person. People in Laos make money out of everything.

The bridge is interesting to cross – it almost feels like walking over a bunch of shopping baskets. It is a very shaky, unsteady activity but very interesting and entertaining. 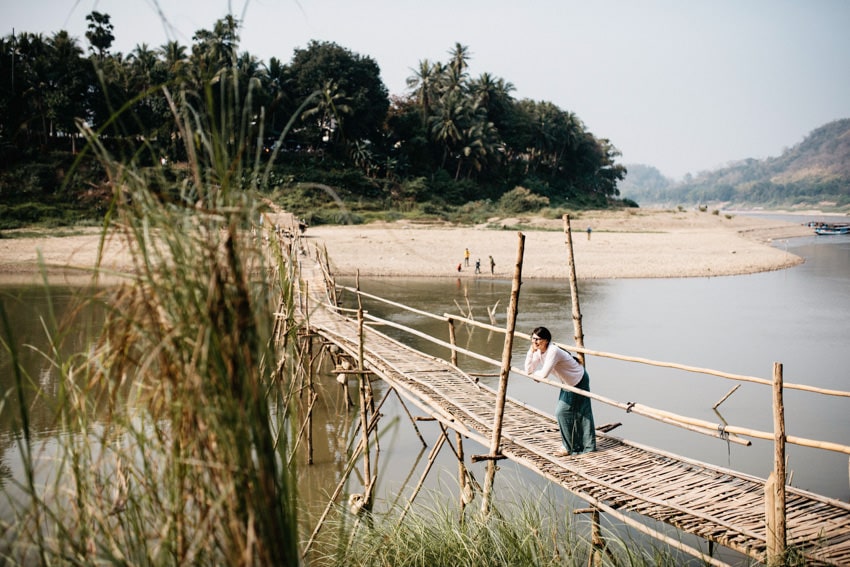 After crossing the bridge and a short walk, we reached Ban Xang Khong, which is the “paper and weaving” village. Lots of weaving shops can be found along the main road of the village. At Lao Textile Natural Dyes, people can learn more about the art of weaving and the production of silk. Of course, there are also big showrooms where you can buy all the handmade products.
The people of the village are also fantastic at producing Saa paper. Saa paper is a rather thick but fine paper they produce from the bark of the mulberry tree. They decorate the paper with flower blossoms in different colors. Then they produce notebooks, bookmarks and lamps from it, which you can buy in a little store for little money.

The village also features 3 Wats that are not crowded, but as beautiful as the ones in the city. 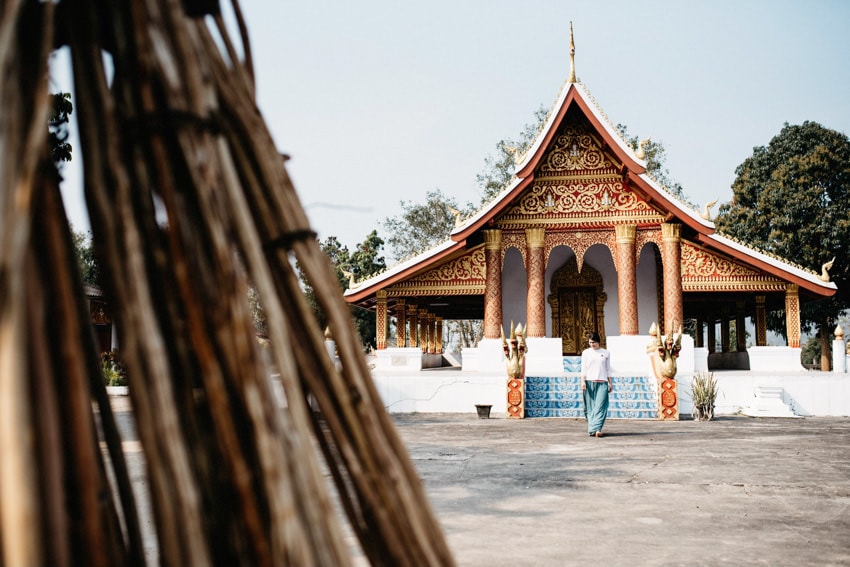 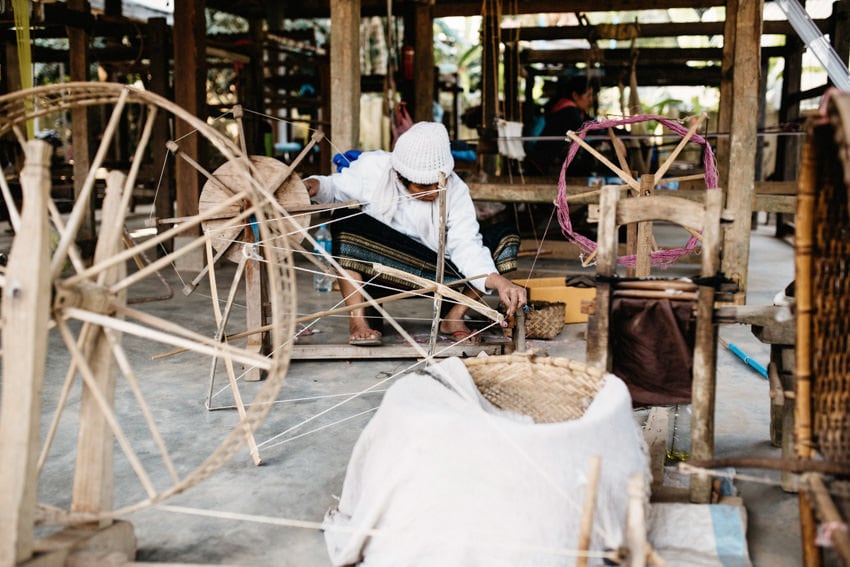 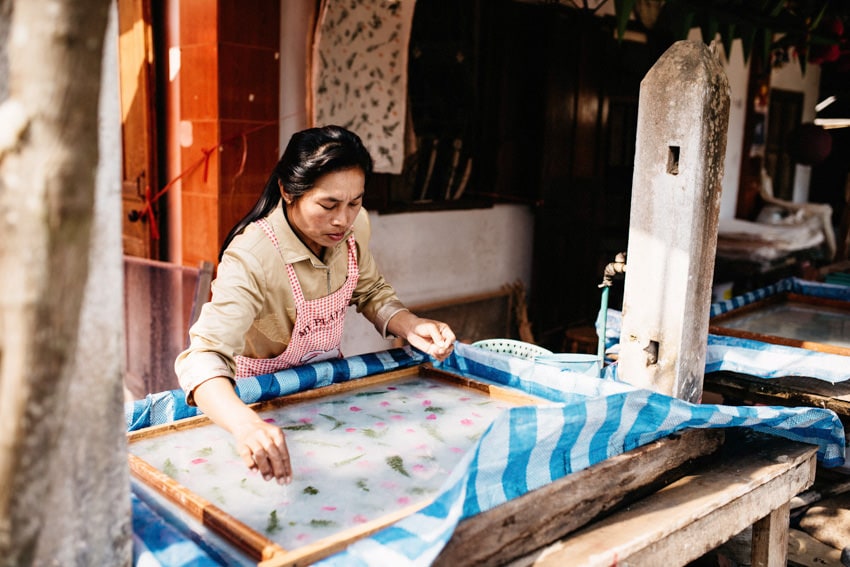 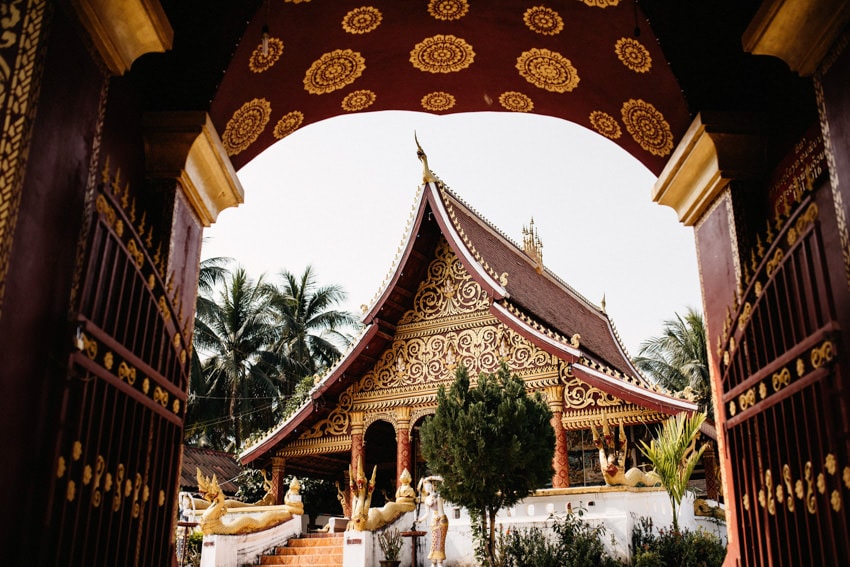 Every morning at 6:00 o’clock, the alms giving ceremony takes place in Luang Prabang. In the course of this daily ritual, the Buddhist Monks leave their various temples in order to walk along the main road in silence, receiving alms from the local people. The ceremony has developed to a tourist attraction nowadays, so also tourists can buy alms to give it to the monks. You will see little stools along the road – this is where you can sit down if you have alms. If you don’t have alms, you must not sit down! 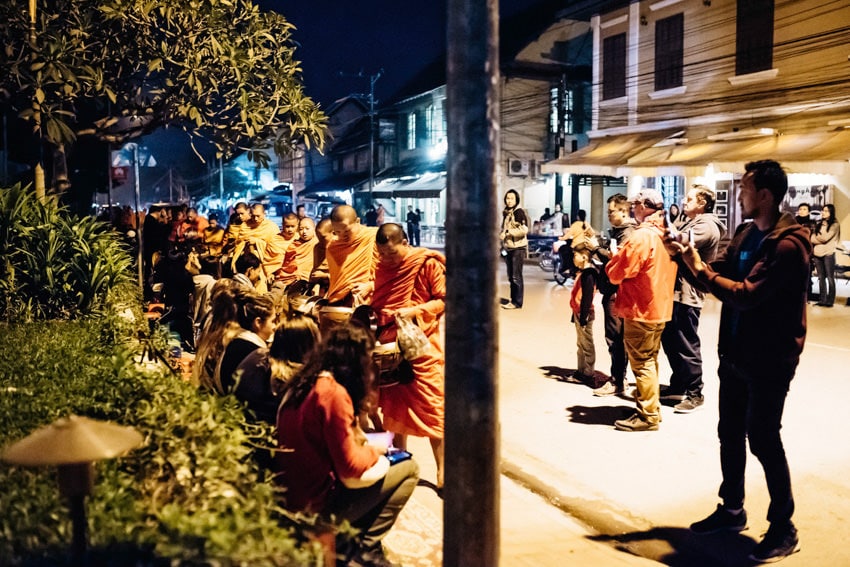 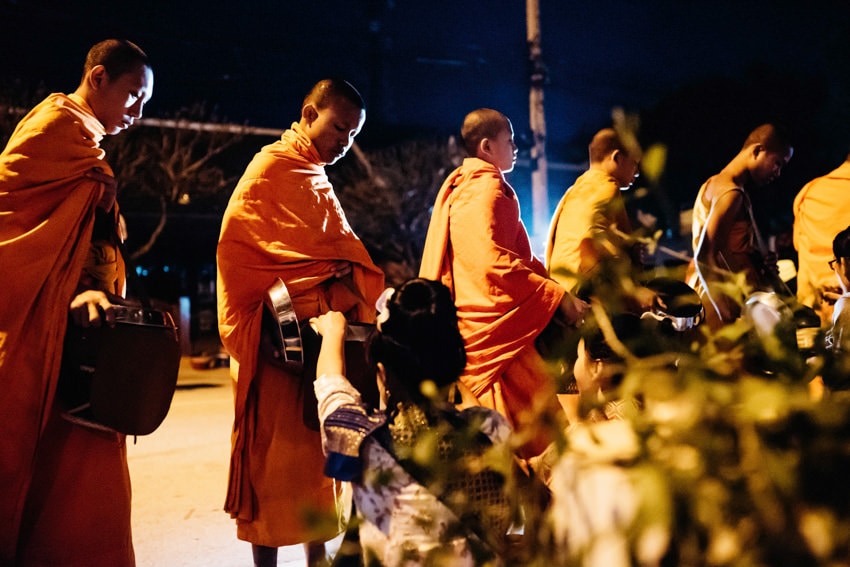 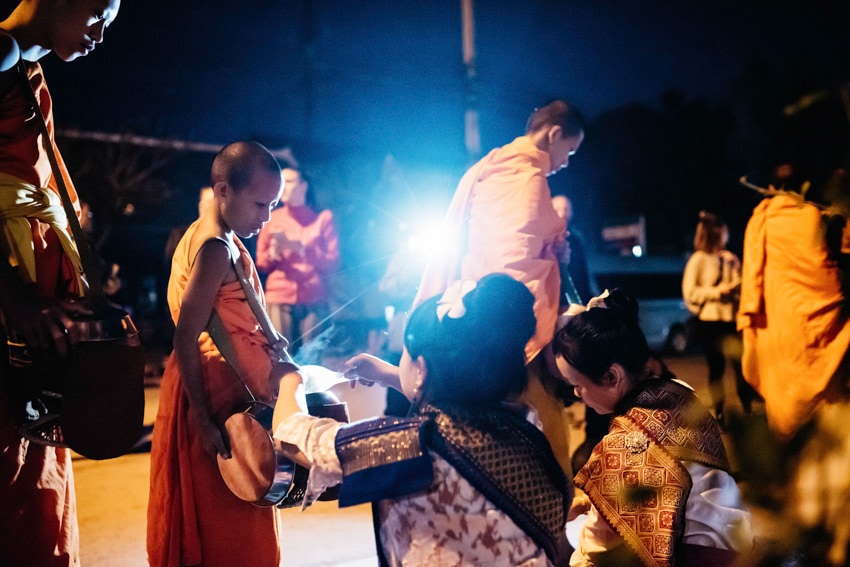 The Best Spot to watch the Tak Bat
Unfortunately, this religious ceremony has become a huge tourist attraction in the past years and finding a good spot to observe the spectacle in silence, is a tough task. Most people crowd around and in close proximity to the Wats. We, by contrast, chose another place – right at the beginning of the street that turns into the market by night.

The rules to watch the Tak Bat are very important to remember to show the respect for this cultural event:

If you are looking for some entertainment or have never seen a nice sunset before, go up, if you want to see an exceptionally wonderful sunset, there is absolutely not necessity to go up. Mount Phou Si is located directly in the center of Luang Prabang and can easily be climbed in 20 minutes via hundreds of steps and an easy path. In order to go up, you have to pay a fee of 20,000 Kip (about 2 EUR) per person. Yes, we agree it is not expensive but still, why spend the money if it is not worth it.
We arrived at the peak about 45 minutes before sunset. The entire space was already completely crowded and, at the first sight, we counted more smart phones than people. 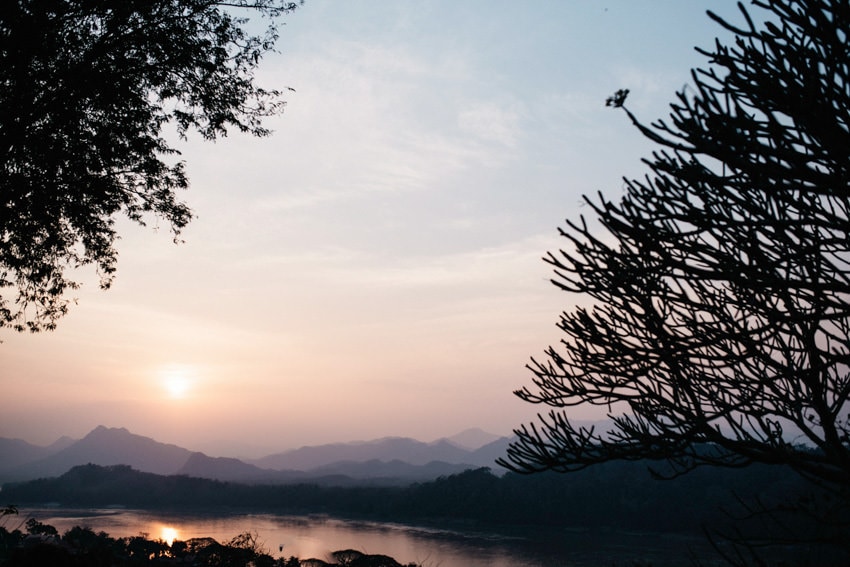 The Thing with the Birds

All over town, especially around the monuments like the Wats and of course, on Mount Phou Si, you are offered little cages with birds for purchase. At the beginning, we did not really understand what was going on and why we were supposed to buy two birds in a little cage. The purpose is still not really clear to us. However, we saw people who bought it and obviously the thing was to free the birds from the cage and let them fly into freedom (where they were caught by the sellers just before they were offered for sale). We perceived it as complete nonsense but maybe we just missed the sense-part of this income-generating, ripping-off tourists activity.

The Thing with the Elephants

Elephant riding and washing is also very popular in and around Luang Prabang. You don’t have to really look hard for one of these tours – they will basically come to you. You can book elephant riding, elephant washing and combination tours all over the city. As we do not consider elephant riding as a very sustainable approach to tourism or travelling, we skipped that part of the intercultural experience. Also the elephant washing did not sound really appealing to us – so, we better visited the Living Land Organic Rice Farm instead to learn everything about an important part of Lao culture and economy: growing rice. Read more about our experience on the rice farm in our other article.

We visited the Kuang Si Waterfalls although everybody told us it was touristy and way too crowded. We thought about visiting the Tad Sae Waterfalls instead, however, we had seen so many beautiful pictures of Kuang Si that we really wanted to visit. And we do not regret it at all. 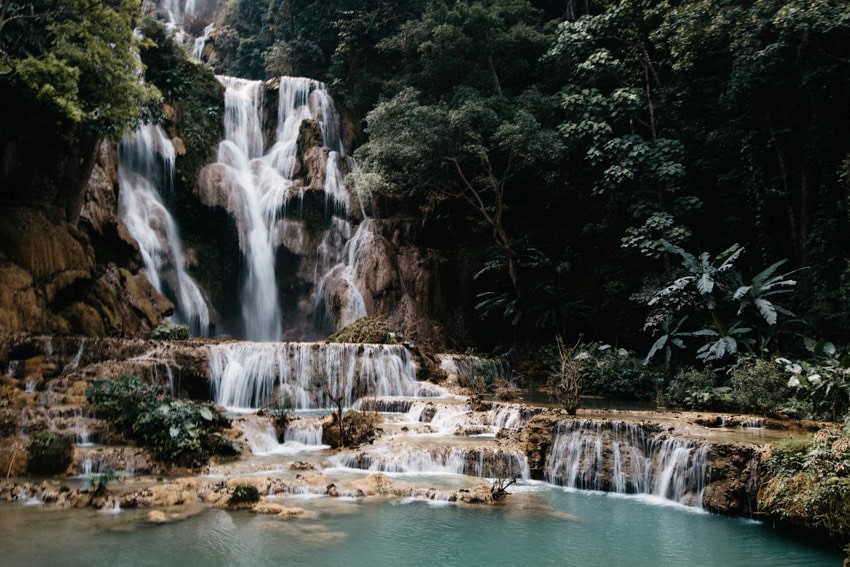 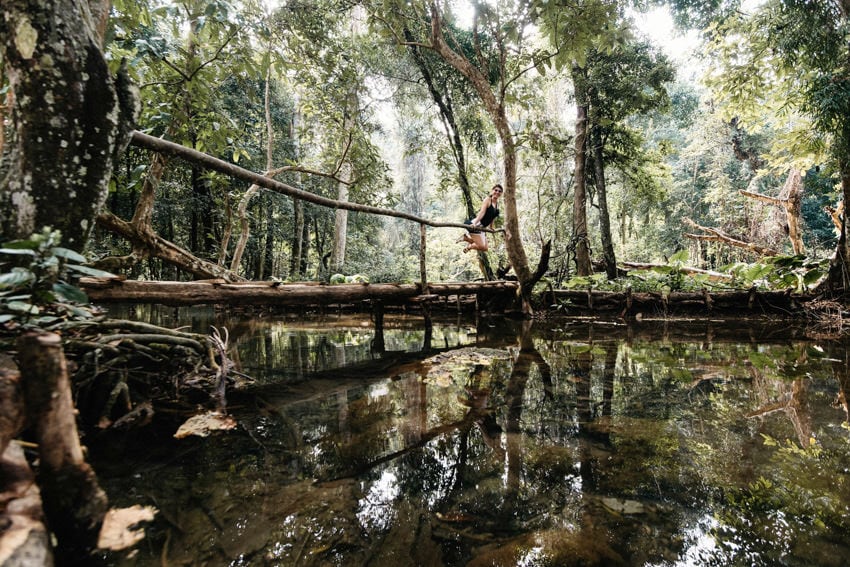 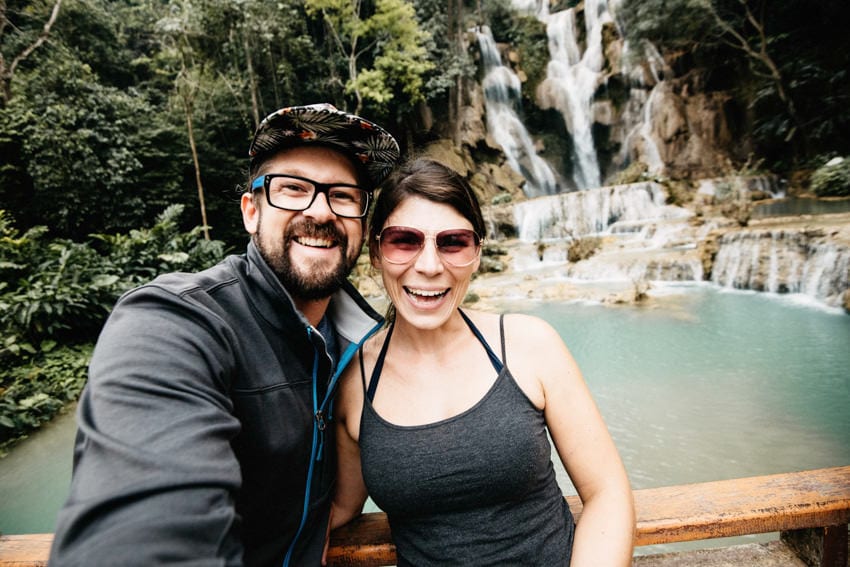 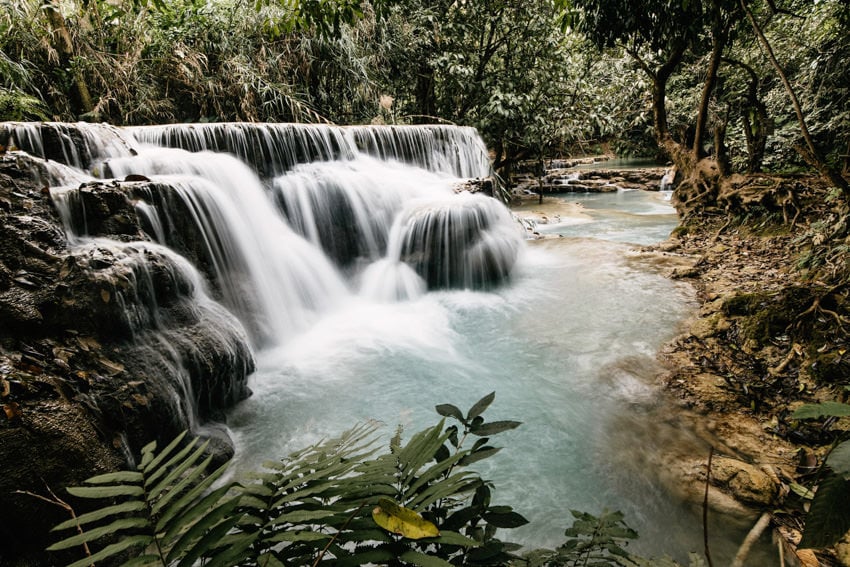 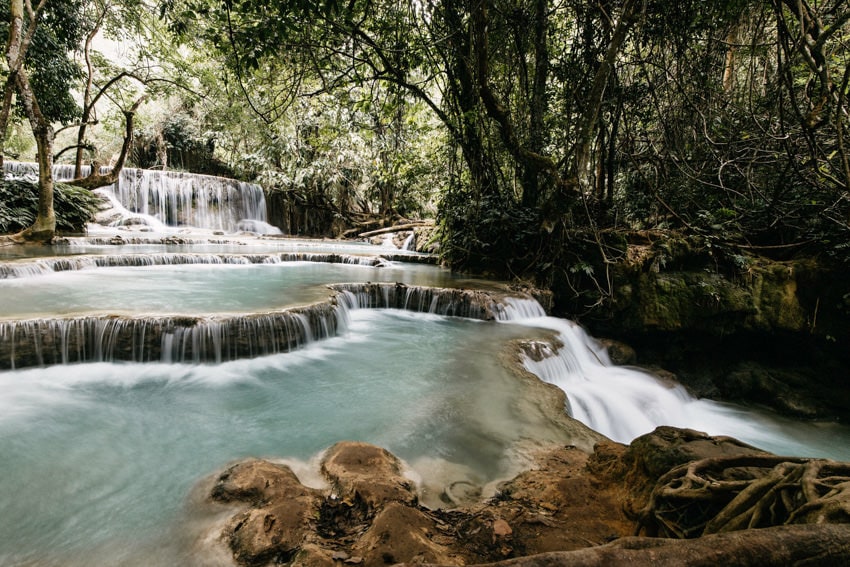 How to get to Kuang Si Waterfalls

The Kuang Si Waterfalls are more than 30 kilometers away from Luang Prabang – getting there by bus takes about an hour. There are several options to get there: by minibus, by tuk-tuk or by motorbike.
We compared prices and risk and concluded that the minibus is the best and most efficient way to visit the waterfalls. Originally, we wanted to rent a motorbike and go there by ourselves but after some research, we took the minibus from our hostel.

Tuk-Tuk
If you walk through Luang Prabang, about 100 tuk-tuk drives will offer you a ride to the Kuang Si waterfalls. The word “waterfall” is definitely the one you will hear most often while being in LP. A tuk-tuk is 200,000 KIP – we were 2 people. If you are a bigger group, it is divided by the people that go – a maximum of around 8 people can go with one tuk-tuk. So, if you are just a couple or a small group, going with a tuk-tuk will definitely cost you more than going by bus.

Another disadvantage of the tuk-tuk is that it is very uncomfortable. It is a good option to go from a bus station to the city center or to the hostel, but it is not a good choice for longer rides. The benches are very narrow and you can just feel each and every single bump along the road.

Motorbike
This was our preferred option as we wanted to go in the very early morning hoping to be just by ourselves. Skipping the crowds, however, turned out to be expensive and risky. Renting a motorbike in Luang Prabang is not as renting a motorbike in Vang Vieng (where this is basically THE vehicle to move around). Motorbikes get stolen frequently in Luang Prabang, there is a lot of traffic on the way to Kuang Si, so driving is more dangerous and they overprice it (renting it for 1 day would have set us back 160,000 KIP).

Minibus
Basically, every hostel in Luang Prabang offers a minibus service to the Kuang Si Waterfalls and back at least 2 times per day.
Our hostel (Downtown Backpacker Hostel) offered one bus at 11:30 AM and one at 12:30 PM (the entire journey takes about 4-5 hours – so, you get to spend around 2,5-3 hours at the falls. The return ride cost 35,000 KIP per person, which was a real bargain (considering they picked us up and dropped us off at the hostel).

The entrance fee to the park is 20,000 KIP per person. You can walk to the very top of the waterfalls – it takes about 30-40 minutes (with some occasional picture stops). In order to avoid the crowds, we just took a few pictures at the 1st bridge, then crossed it and took the “alternative” route through the jungle up until the 2nd bridge – this is where you have a very nice view on the entire fall coming down from the top. Then we continued to walk up to the top of the falls – there you can also find an abandoned bathing possibility. The way down is very slippery and steep, but still, we enjoyed the hike a lot. The view is not necessarily the best from the top (of course, the view on the waterfall is better from the bottom). On the way down, we walked the path on the other side than on the way up – so, we got to enjoy the best views of the falls as well. The crowds had been more or less gone by then – so, we liked it a lot.