The Black Echo: 1/2 Day at the Cu Chi Tunnels

The Vietnam War – North vs. South

The Vietnam War took place for 30 years from 1955 – 1985 and was a war between the two parts of the country – the anti-communist South and the communist North. What started as a Civil War, ended as a large proxy war during Cold War – involving many of the large superpowers. The Soviet Union and China ended up supporting the North, while the USA had sent troops to the South. The Vietnam War was won after 30 years by the communist North after President Nixon had the troops continuously withdrawn from Vietnam starting in 1969. Until 1975, North Vietnam conquered South Vietnam completely and ended the war. The war caused many million people to die and the effects are still visible – many people are still born disabled as a consequence of Agent Orange being used for defoliation by the US (to make it harder for the Vietcong to hide in the deep jungle).

In order to defeat the country against the US troops, the Vietcong established an extensive network of underground tunnels as their operation’s base. 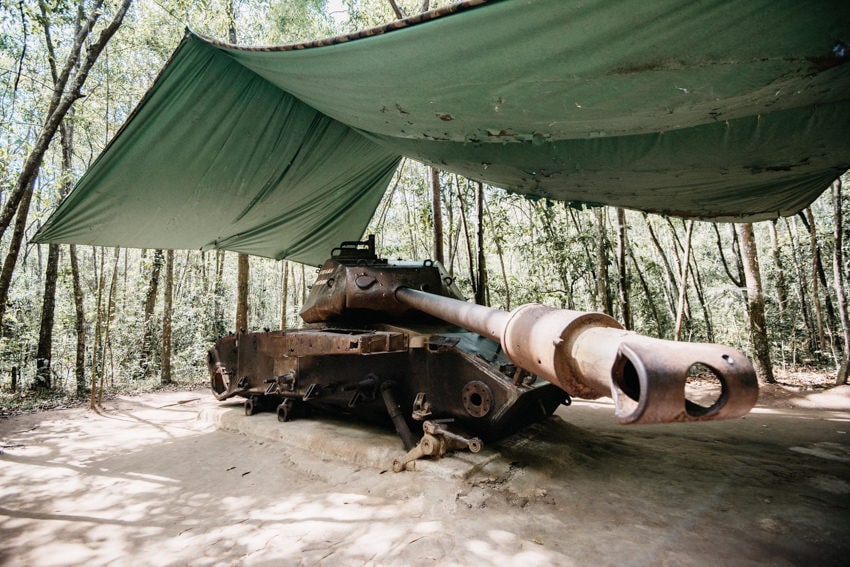 The tunnel system helped the Vietcong in the combats against the US, as they could hide and surprisingly attack from ambush. Still, this advantage did not really add to the convenience of life below the ground level. Life conditions were really tough for the Vietcong: air, food and water were scarce resources and many animals including venomous snakes and scorpions were also residing in the tunnels. Sanitary conditions were really bad and sicknesses such as malaria common. The tunnel system had many layers (not just one) and the deeper they were located the tighter it got. The Vietcong life outside the tunnels only took place during the night – that is also why many of them had problems seeing after many years in the tunnels.

A complex of the tunnels has been preserved by the Vietnamese government and can be visited by tourists. We did a guided half-day tour (9:00 AM – 4:00 PM) by bus first visiting an organization where they employ Agent Orange victims that were born with disabilities and then the Cu Chi Tunnel War Memorial Park. You can also visit the site individually, however, we do recommend going with a guide as you get a lot of insights and in-depth information that help you understand things better.

The path through the park is about 4 kilometers long (2.5 miles) and leads through the jungle of Cu Chi. The area was completely cleaned and freed from remaining bombs and mines before it was opened to the public. 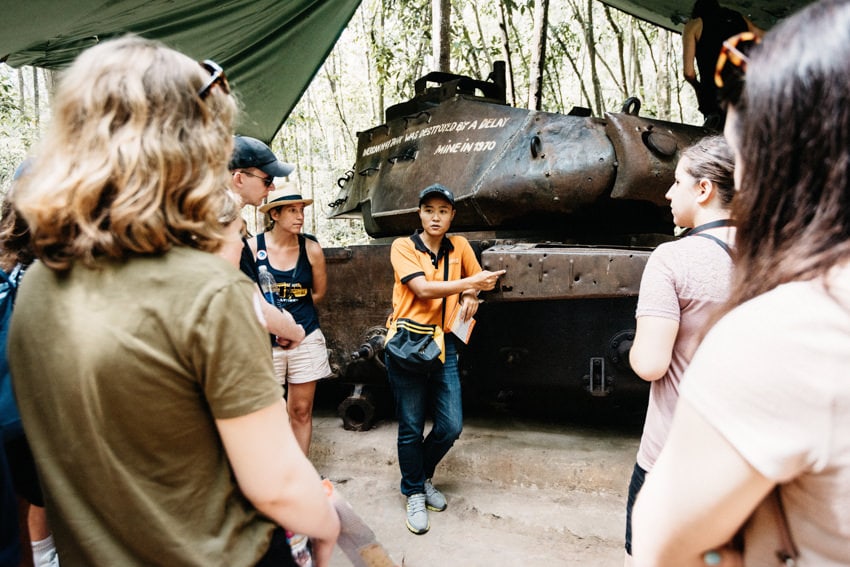 In the first section of the park, you get to know the different entrances that the Vietcong used for the tunnels. You can also try the classic entrance yourself – it is basically a hole in the ground with the lid covered with leaves. Some members from our group tried it and it took them quite some time to go inside, close the lid and completely vanish inside the tunnel. Our guide told us that it took the Vietcong only a few seconds – with all their gear and weapons. Another entrance we saw was a very clever system: it led into water where the Vietcong had to swim for about 5 minutes to reach the real entrance to the tunnel. In order to prevent the tunnel from being flooded, the system was built upwards – a direction in which water cannot run. 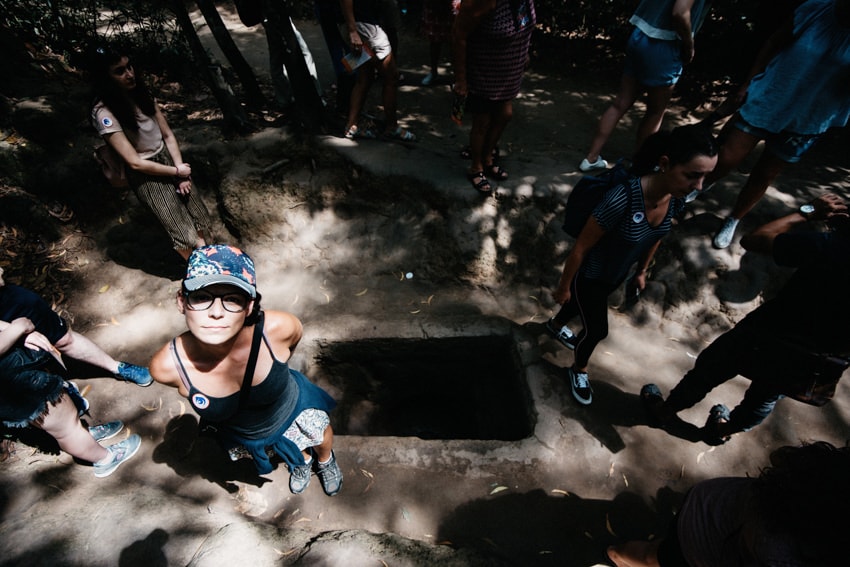 At the end of the tour, there is a tunnel system of 100 meters in length that was especially built for tourists to walk through. After every 20 meters you will find an exit – just to make sure people can exit in case it gets too tight. If you suffer from any signs of claustrophobia, you should not go into the tunnel. Bianca is a little bit claustrophobic and she could not enter – it was really tight and low (you have to walk through in a crouched pose). With every 20 meters the tunnel gets lower and tighter – only the last 20 meters are as tight and low as the real tunnels were.

One section of the park demonstrates all different kinds of traps, the Vietcong had in use in order to protect their tunnels from being entered by US troops. The Vietcong were highly creative designing the traps for the US troops – the objective was always the same one: heavily injuring their limbs and bodies in order to immobilise them. All traps are exhibited in the park – from the “Window Trap” over the “Rolling Trap” and the “See-Saw Trap” to the “Folding Chair Trap” – the effects of all are demonstrated by the guide with a long wooden stick. They basically all included long metal nails to heavily injure the person falling in – and making it almost impossible to free the person from it. 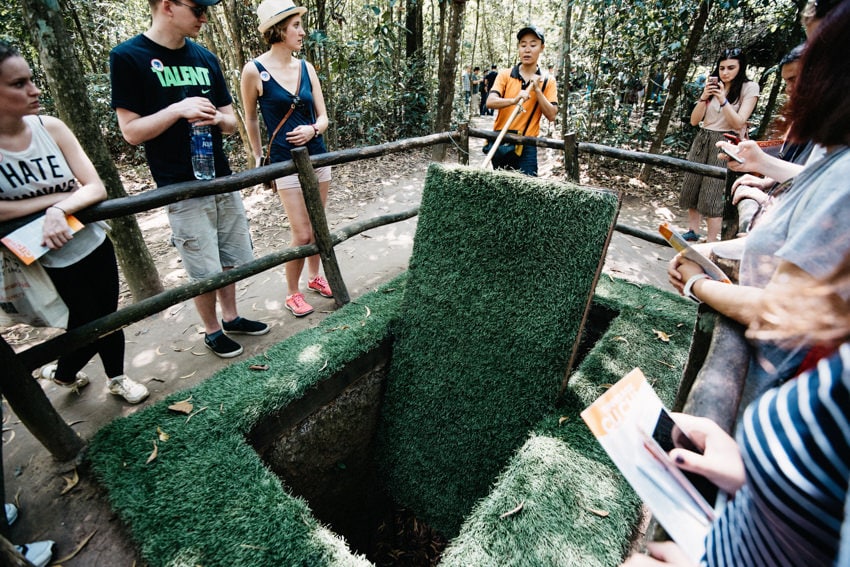 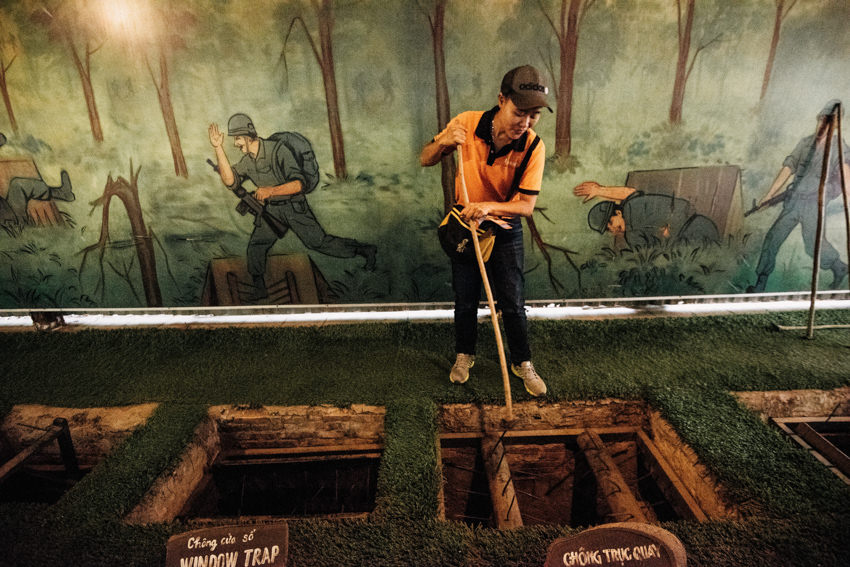 The traps were a real brutal way to protect themselves – but which weapon used in Vietnam war wasn’t? Napalm was used by the Americans when attacking the enemy – causing them to be hit by a bomb that became a gluey mass burning through the skin and body slowly. Agent Orange was used for deforestation and defoliation in order to disable the Vietcong from hiding in the deep forests. However, it was a strong pesticide that still leaves its traces – thousands of children have been born with massive disabilities since then.

Already when you enter the park, you can hear shooting noises all over the place. At the end of the tour, you get to know where they come from – and it is not from the audiotape. At the “Shooting Range”, you have the chance to try the weapons used in the Vietnam War – AK47 (Vietcong) and M-16 (US Troops), to name only the two most famous ones. For about 300.000 Vietnamese Dong (approximately 10 Euros / 12 USD) you can purchase one magazine of your preferred weapon – if you are willing to invest more money, you can try as many weapons as you want.

Personally, we perceived it as very macabre, however, it is a well-accepted way of dipping deeper into the gruel dimensions of a war that has, fortunately, been over since the 1980s. 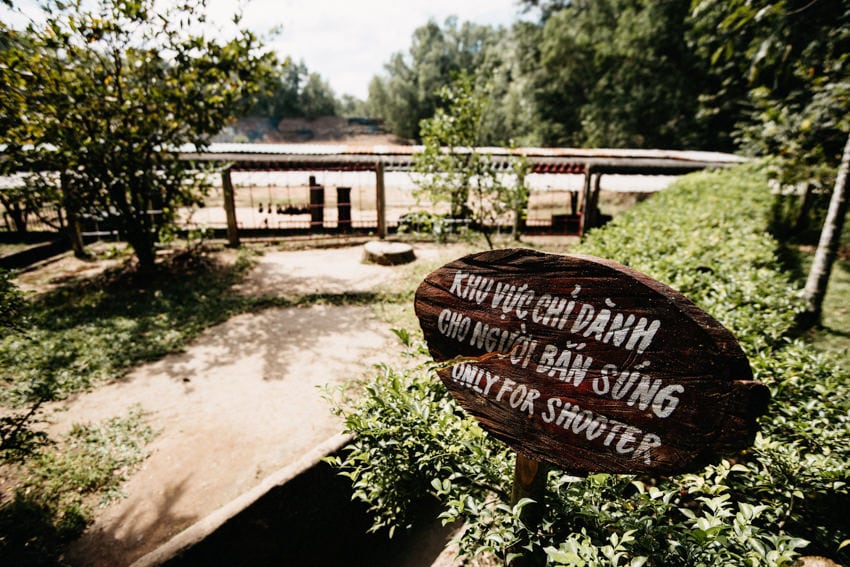 If you are interested in getting to know more about the Vietnam War – which is a significant part of the country’s history, we do definitely recommend going to the Cu Chi Tunnel War Memorial Park. It can be easily reached from Ho Chi Minh City with a ½-day tour. We do recommend a guided tour, as the tour guides provide a lot of deeper insight and are very informative.

We did the tour with Kim Travel Ho Chi Minh City and were very satisfied. The group sizes are usually between 15-20 people which is not too big. The English of our guide was pretty much ok – it is hard to understand in general because of the different pronunciation of certain letters.

Cost of the Tour: 5 Euros / 7 USD per person excluding the entrance fee to the park (4 EUR / 5 USD) – including: water, shuttle and tour guide

If you are interested in this huge but unfortunately, bloody part of Vietnamese history, you should definitely visit. We do not recommend doing it individually as the guide helps you understand what you see. They do a really good job explaining the history and events, which gives a really deep insight into the happenings and life during Vietnam War. It is not far from Saigon (but still 1,5 hours drive) and you can easily do a 1/2 day tour from there.